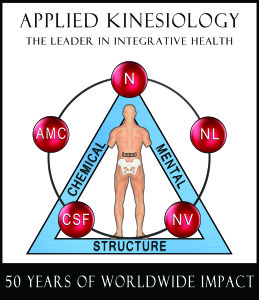 Applied Kinesiology muscle testing (AK) is a diagnostic system that is used to evaluate a person’s Triad of Health – Structural, Chemical, and Emotional.  AK doctors are physicians who most often are chiropractors, though some medical doctors, dentists, psychiatrists, and other healing physicians practice applied kinesiology. AK was founded by Dr. George Goodheart in 1964.  Dr. Goodheart is also known as the first official chiropractor for the United States Olympic Team at the 1980 Lake Placid Olympics.

“Applied kinesiology (AK) is a diagnostic system that uses manual muscle testing and other standard methods of diagnosis to evaluate the nervous system’s response to sensory input and challenges via the dynamics of the musculoskeletal system. Treatments may involve various myofascial therapies, cranial techniques, meridian and acupressure skills, clinical nutrition, dietary management, lifestyle and exercise education, evaluating environmental irritants, various reflex procedures, and specific manipulations. Each treatment is individualized for the patient to help restore their health and maintain well being throughout life. AK is a non-invasive system of health care that is unique in the healing arts, and those physicians who practice such system often resolve a patient’s health care dilemma faster and more effectively than traditional methods.”

AK employs muscle testing with other standard methods of diagnosis. This is very important to understand as many people perform muscle testing, such as an “arm pull-down test” or other various modifications of muscle testing, to diagnose what may be going on with a person’s health. This type of muscle testing is a misused and oversimplified type of testing and is not AK. AK done by an untrained/unlicensed professional can be no more worthwhile than simply flipping a coin, but many studies have shown the reliability and reproducibility of AK when done by trained professionals. Applied Kinesiology muscle testing is performed using many specific muscle tests to see a real-time sensory-motor (input-output) response, along with a thorough patient history, orthopedic and neurological testing, and often laboratory work, to get a thorough understanding of a person’s health problems and how to best deal with them.

Muscle Testing and AK when done by a trained professional is not a type of energy medicine, but is a scientific protocol that evaluates ones nervous system and how it responds to external stimuli to the body.

Dr. Lebowitz is certified in Professional